Ancient Trees from the Original Vegetation and Cultural Landscapes

The original vegetation covering the IGC land can be deduced from the mangrove and riparian forests along the Brisbane River and from several large, very old trees dispersed across the site. We can also observe the same species growing in the remnant forests in surrounding lands, including the St Lucia Golf Course, University of Queensland and State Government properties.

A note on terminology   Since the late 1990s, Queensland scientists have used a system of vegetation classification based on what are termed Regional Ecosystems – described by three numbers. The first number refers to the location of the bioregion within the state.  For us, this is Bioregion 12 – Southeast Queensland.  The second number refers to the Land Zone, comprising the physical nature of the site including underlying geology, soils and topography.  The third number describes the dominant vegetation type by the tallest stratum – for example, trees in forests.  This is the system used in the discussion below.

Cultural Landscapes   Prior to being used for golf, part of the site was used as a dairy farm.  Some of the largest trees probably pre-date that period.  The Long Pocket golf course was opened by IGC in 1964 (see Heritage section on the club website for more detail) and many of the older existing trees were planted on site around that time.  Many of the flowering trees have been illustrated elsewhere in this Natural History project, but some of the largest non-flowering or less showy specimens have been included here as ancient trees.  Since IGC moved here in 1985, progressive plantings of many, many new species have continued up to the present time, as the course has continued to be improved.  We are now on the verge of an exciting new era in master-planned course development.

This part of the Natural History of IGC is intended to illustrate the ancient trees that have persisted in the landscape from the original vegetation, previous dairy use of the site and more than 55 years of golfing history on this site.

The banks of the Brisbane River are subject to the erosive impacts of flooding (for example, 2011) and on-going erosion by the wash from leisure craft, particularly during high tides.  The presence of mangroves serves to stabilise and protect the banks from such impacts. 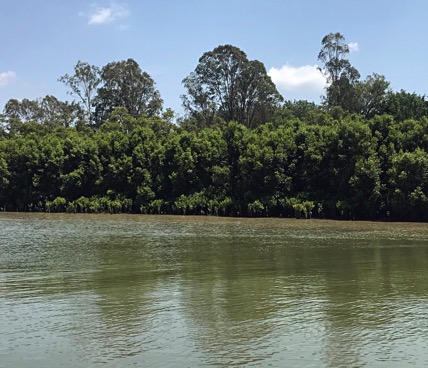 Figure 1  A view towards IGC (around Red 5) from the river during high tide, showing the Grey Mangrove forest in front of a scattered row of Queensland Blue Gums (Eucalyptus tereticornis) on top of the river banks, above the tidal range.

Most of the original tall open forests on the riverbanks, undulating floodplains and alluvial terraces (land zone 3) have been cleared, but some individual trees, typical of these forests, persevered and their large size has made them icons in our landscape.  These are some of the ‘Ancient Trees’, many of which are well over 100 years old.

For example, the Queensland Blue Gum (Eucalyptus tereticornis) in Figure 2 below, on the RHS of Blue 4 green approach, is a healthy example of such an ancient tree.  Several other blue gums of similar size form a ‘guard of honour’ for this golf hole, lending it a unique character. 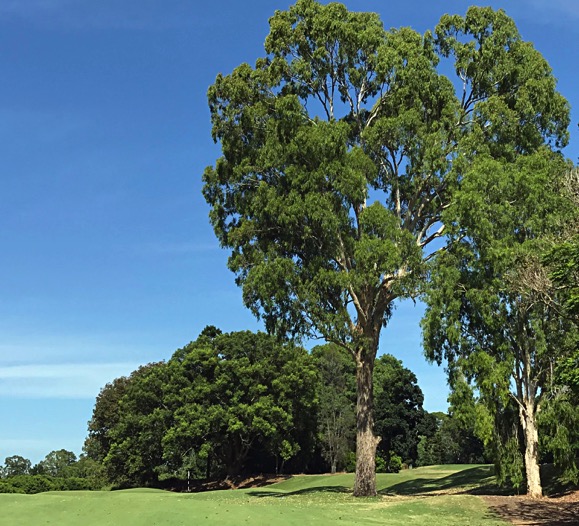 Figure 2  This 25-30m high Queensland blue gum guards the right-hand approach to Blue 4, providing an obstacle for wayward golfers! In the past, this tree hosted an Osprey or Whistling Kite nest for several years.

A fine, ancient specimen of Black She-oak (Allocasuarina littoralis) is also present on the LHS of the Blue 4 fairway.  This tree, illustrated below in Figure 3, is unusual in the landscape, as bushfires often result in the predominance of younger she-oak saplings and trees in forested areas.  Obviously, the irrigation system protects the golf course from such fires. 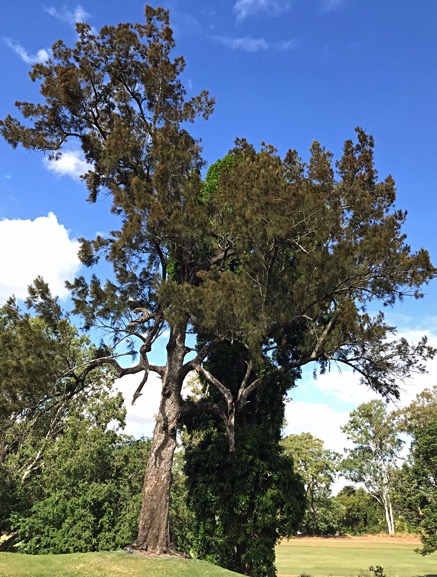 Figure 3  An ancient Black She-oak (Allocasuarina littoralis) stands sentinel on the LHS of Blue 4 fairway.  A second, companion tree stands at the top of the rise on the RHS, also being on the RHS of Blue 6.

Other species that grow on the floodplain at IGC include the Pink Bloodwood (Corymbia intermedia), Broad-leaved Apple (Angophora subvelutina), Moreton Bay Ash (Corymbia tessellaris) and Grey Ironbark (Eucalyptus siderophloia) – a large specimen of which recently died on the RHS of blue 6 fairway (previously mis-identified as Eucalyptus sideroxylon, that is considered to not occur in greater Brisbane).  They all exist presently as individual trees but have not yet achieved the size to be considered ‘ancient’.

Again, most of the open forests on the low hills above the floodplain at IGC were cleared in the past, with only remnant individual and small groups of Ancient trees retained.  The (land zone 11) geological substrate here is a metamorphosed sediment, called Bunya phyllite, with the soils described as red podzolics and lithosols – generally much shallower than the deep sandy, silty soils of the floodplain.  Four original vegetation species are illustrated here, beginning with a small number of Spotted Gums (Corymbia citriodora var variegata), seen in the Harts Road car park (Figures 4 & 5 below).  Some of these have hollows that provide important habitat for birds, reptiles and arboreal mammals. 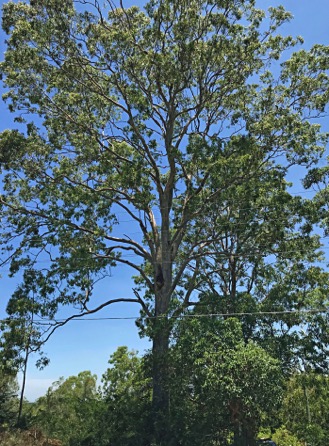 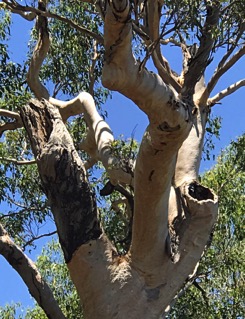 Figure 5 – Large hollows form after limb fall, often due to lightning strike, providing habitat for arboreal fauna.  These hollows are usually only observed on ancient trees.

Secondly, three scattered specimens of ancient Brushbox (Lophostemon confertus) persist in the area behind the Red 6 green.  Several of these appear to have been struck by lightning, but successfully regenerated.  What marvellous adaptability! 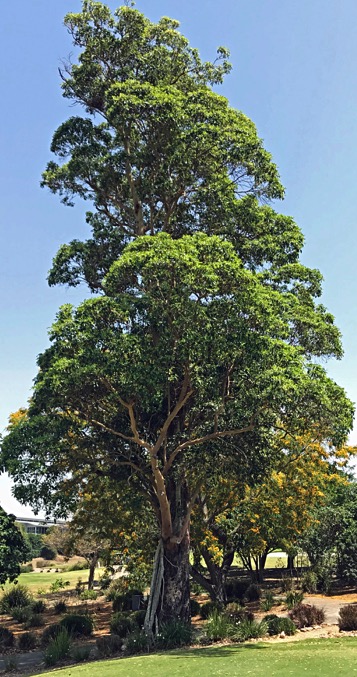 Figure 6 – An ancient specimen of Brushbox also stands proud behind the Green 8 men’s tee.  A parasitic Small-leaved Fig (Ficus obliqua) has colonised a lower fork in the trunk of this Brushbox, sending aerial roots down into the soil, and may eventually kill the old Brushbox.  Survival of the fittest?

Thirdly, two large, Small-leaved Figs on the RHS of the old Green 6 green have actually grown to become ancient trees in their own right, having presumably already  ‘strangled’ their hosts.  Aerial roots can be seen on the RHS of the tree in Figure 7 below.  All the figs are effectively dispersed by Figbirds, also observed widely across the IGC landscape. 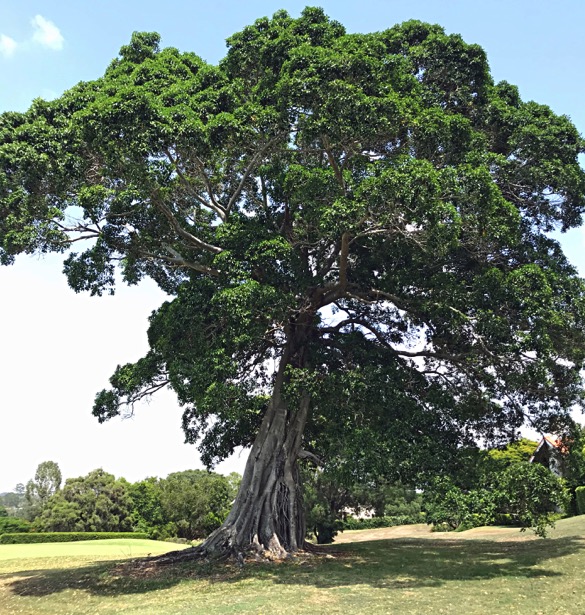 Fourthly, there is a single ancient specimen of the Narrow-leaved Ironbark (Eucalyptus crebra), remaining behind the tee of the Green 7 par-three (Figure 8 below).  While this tree has also been colonised by a relatively young Weeping Fig, similarly to the Brushbox in Figure 6, it remains very healthy and will live for many more decades. 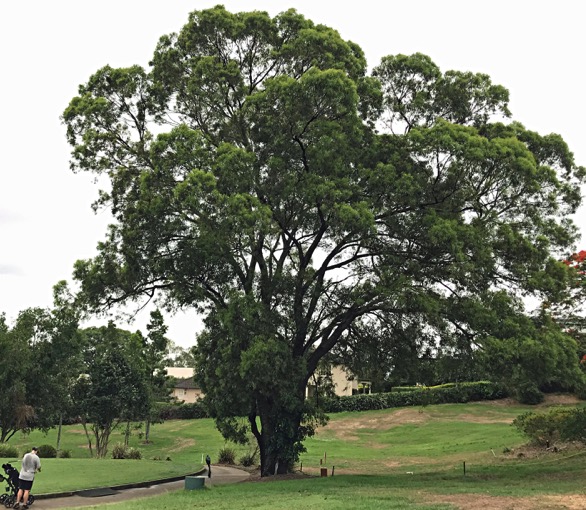 Figure 8 – An ancient specimen of Narrow-leaved Ironbark behind the Green 7 tee, supporting a parasitic Weeping Fig (Ficus benjamina) in a low fork of the trunk.

Ancient Trees of the Cultural Landscape

Despite the above title, the first two trees chosen as ancient cultural trees may once have been native to our site.  These are the Flooded Gum (Eucalptus grandis) and the Moreton Bay Fig (Ficus macrophylla), both of which are clearly iconic on our golf course.  These species naturally occur in Vineforest and are widely cultivated in parks and rural areas. 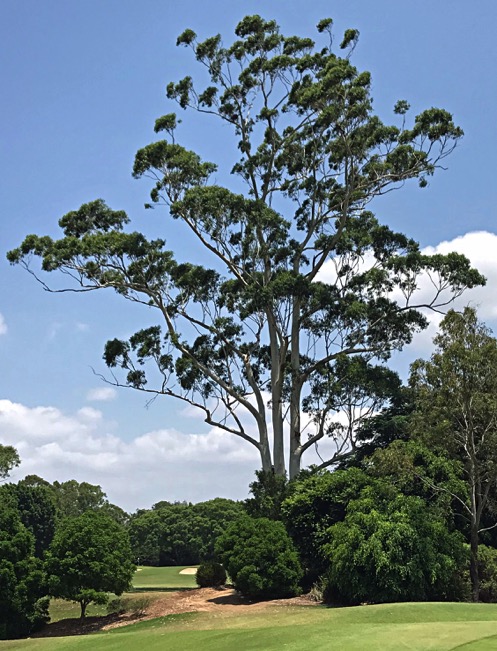 Figure 9 – This magnificent ancient Flooded gum visually dominates the area between the Gold 3 green and Gold 4 men’s tee.  It can be observed widely across the course, including from the Poinciana Bar, where it emerges well above the rest of the vegetation canopy.

Other, smaller specimens of this species also occur along the top of the riverbank, especially on the LHS of the Gold 3 fairway. 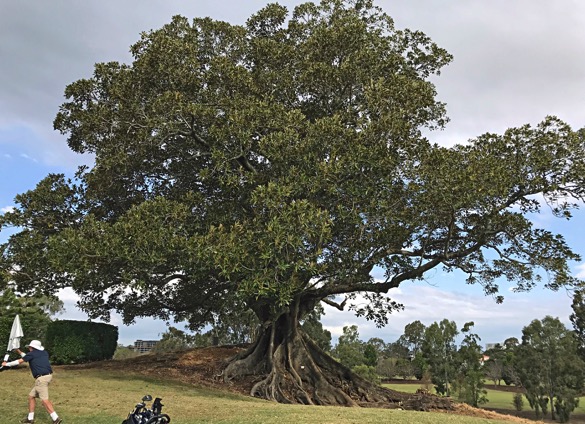 Figure 10 ­– This fine ancient specimen of Moreton Bay Fig (Ficus macrophylla) is the ‘target’ tree behind the Blue 1 green and stands proud in the landscape at this point, lending the hole a strong landscape character.

Other, smaller Moreton Bay figs also occur in the vicinity of the original farmhouse to the RHS of Green 8 and elsewhere on the course, but do not approach the size of this beauty!

The balance of ancient trees included in this account of the IGC cultural landscape have been chosen for their contributions to the landscape character of IGC, both as individuals and groups.  They are all members of the Conifer (Gymnosperms, cone-bearing species) families and, although not displaying colourful flowers, provide contrasting dark green colours, striking textures and vertical punctuation marks in the landscape. 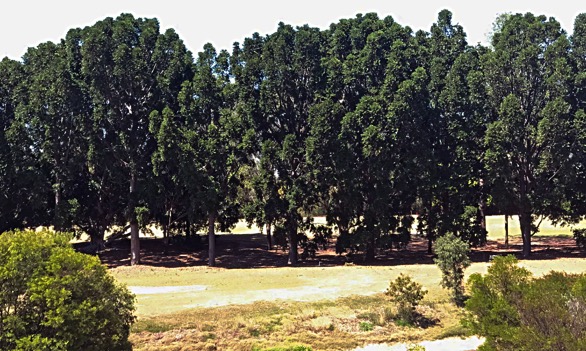 Figure 11 – An impressive stand of more than 15 native Kauri Pines (Agathis robusta) dominates the planting along the RHS of the Red 5 fairway, defining this side of the hole and providing a considerable barrier for stray golf shots!

This image was captured from the fairway of Red 6, where the view is obtained over the recently-built dam. 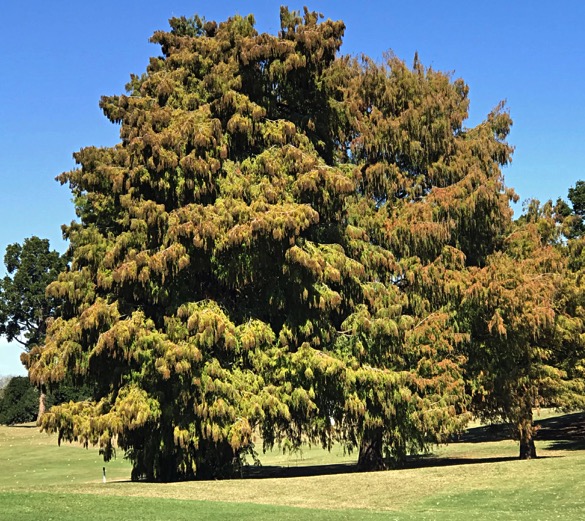 Figure 12 – A small grove of ancient Swamp Cypress trees (Taxodium distichum) separates the low point on the RHS of the Gold 9 fairway from the driving range.

There is a prominent second grove behind the Blue 3 green.  These North American introduced trees survive very well in low-lying, damp ground and provide an interesting contrast in character to the other conifer species in the landscape.

There are also a number of stands of the native Hoop Pine (Araucarua cunninghamii) on the golf course.  One prominent group planted along a ridge provides an effective screen between the Blue 4 and 6 fairways and ‘catches’ many mis-hits from the former!  A second major group divides the Gold 2 and 3 fairways. 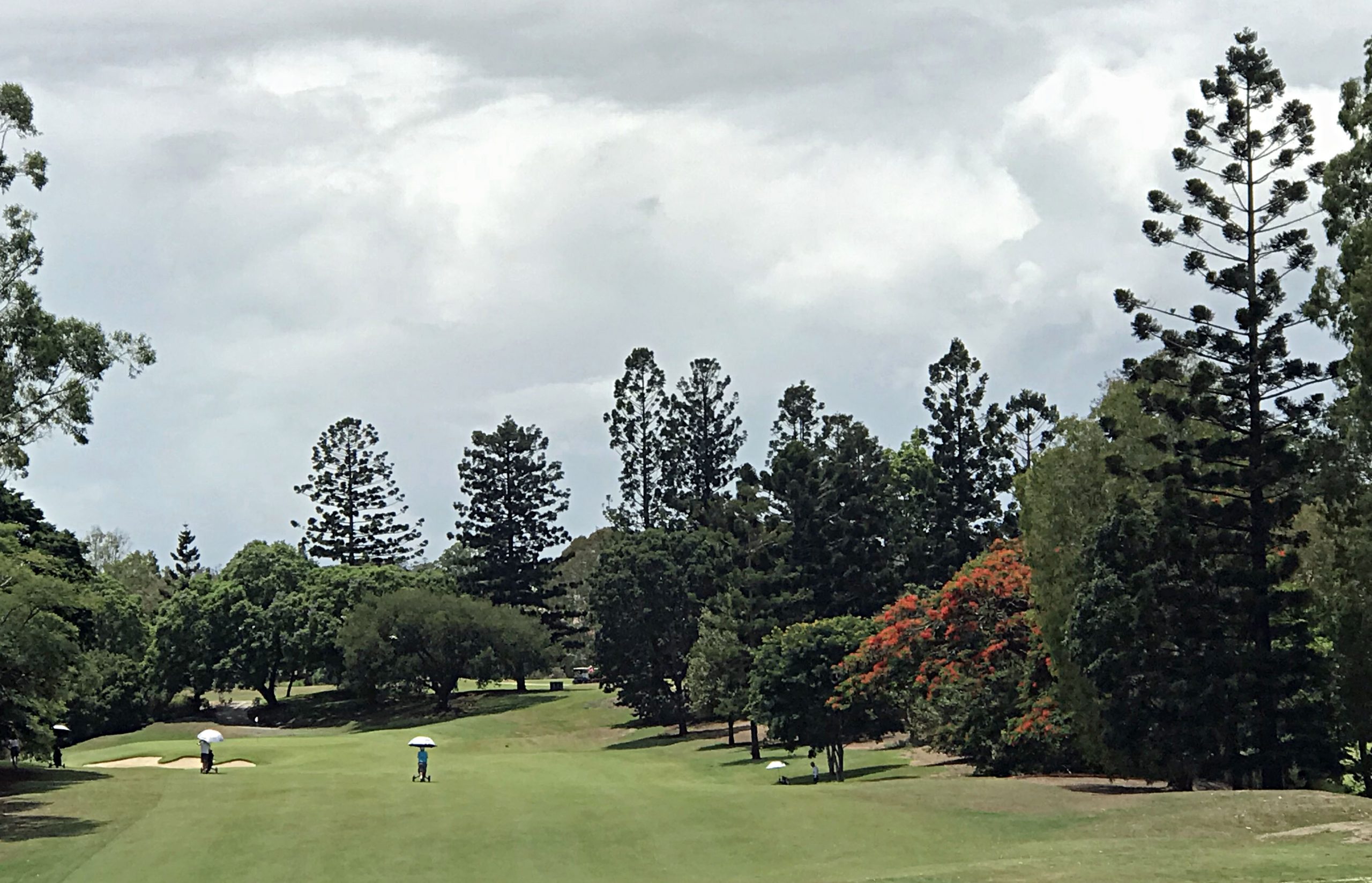 Figure 13 – A staggered row of Hoop Pines separates the fairways between Blue 4 and 6, as seen from the Blue 6 tee complex.  These iconic trees grow to a mature height of 25-30 metres and will continue to provide vertical elements in the landscape for many decades to come.

Another related native conifer that contributes prominently to the IGC landscape is the Bunya Pine (Araucaria bidwillii), illustrated in Figure 14 below.

The remaining native Bribie Island Cypress Pines (Callitris columellaris) and Brown Pines (Podocarpus elatus) are currently present in smaller numbers and/or smaller individuals, but are destined to become iconic trees in the future.

Figure 14  This mighty Bunya Pine is a landmark tree for Red 5 & 6, next to the latter’s men’s tee area.  Beware falling nuts!